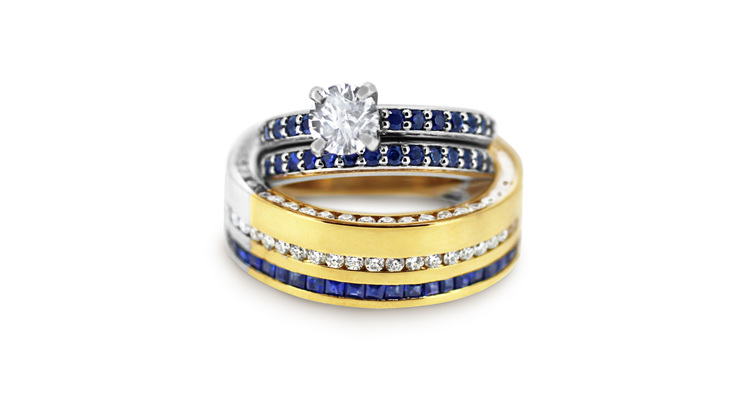 This very special engagement ring and wedding band set was created by blending the clients’ creative ideas with our designer’s and jeweller’s design, craftmanship and technical expertise.

The initial concept for the rings was based around the idea of working with sapphires. Although not a traditional gemstone to use for an engagement ring, the clients really liked the idea of having something unique.

It was decided that the engagement ring would be quite simple. Working with our designer Hazel, the couple decided to design a really beautiful and classic diamond solitaire engagement ring accented by deep blue sapphires along the band. The result is classic but also very different, and the contrast of the two bright hues makes it really eye-catching.

Hazel took all these concepts and worked to arrange everything so that the proportions worked and it was well balanced. It took a lot of thinking and communicating with our CAD designer and jewellers on what was possible and how it would be arranged. “We adopted an attitude of 'everything is possible' and worked to make it work”.

The bride wanted her ring made half in yellow gold and half in white gold and the groom decided he wanted his like that too, which Hazel loved — “It makes it extra cool for him as it’s like he has a choice between two rings while he’s wearing it”.

The groom’s wedding band was a challenging and intricate job — which our jewellers love! Jeweller Dan had to put together the two tones, then fit and set all of the diamonds and sapphires. The team had already mathematically worked out the stone size in relation to the circumference (determined by the groom’s finger size) so that the proportions were right and so that stones would go all the way around. The stones then needed to line up, each sapphire with its corresponding diamond. This was an intricate job requiring extreme skill and attention from Dan. All together, assembling the rings and meticulously setting 78 sapphires and 91 diamonds took 30 hours!

The end result is a stunningly unique engagement and wedding band set. The combination of diamonds and sapphires and yellow and white gold illustrates the endless possibilities when designing your own rings. We love listening to client’s ideas and desires and then bringing them to life, creating something that will be cherished for years to come. What does your dream ring look like?

Thanks guys for allowing us to share your ring designs and story!