The Tāne pendant is the latest creation from our Maori Legends collection. After we created Maui, a stunning one-off pendant inspired by the Māori legend of Maui fishing up the North Island of New Zealand, we knew there were more stories and additions for this collection.

Introducing the Tāne pendant, inspired by the Māori Legend of Tāne. Tāne, god of forests and birds, decided to separate his parents, Papatuanuku, the Earth mother, and Ranginui, the Sky father, with the help of his brothers, the other Māori demi-gods. Their parents were in a tight embrace and did not want to be parted, but this caused nothing but darkness in the world.

The pendant is hand crafted in 18ct yellow gold and its elongated design represent Tāne and his siblings’ journey of separating their parents to reveal the light, thus creating Earth. Not designed to be a standard pendant, this piece aims to represent the culture and heritage of Māori myths and legends and bring them to life through aesthetic and bold designs. 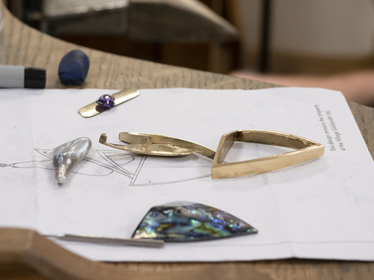 Entirely handmade, not one piece of the pendant has been cast or prototyped. On the underside of the paua is a feature purposely engraved by hand to create the effect of woven flax leaves to further reflect the pendant's aspects of Māori legend and culture.

The Tāne pendant features a pair of beautifully rough-cut tumble polished sapphires, however, the stars of the show are the hand-sculpted piece of Paua and the natural South Seas rough pearl. Rough cut sapphires show the journey of Tāne and his siblings, and their disagreement with their brother Tawhiri Matea, the god of winds and storms, on separating their parents. The pink sapphire represents Tawhiri Matea, and how he left for the sky to be with his father after the separation. The purple sapphire represents Tāne’s brothers, who stayed on earth, between both of their parents. The 18ct yellow gold arrow that stretches between the paua and presses into the pearl represents Tāne amid the act of pushing his parents apart to allow for light to stream in.
The original design concept was sketched onto paper, from there the crafting journey began. 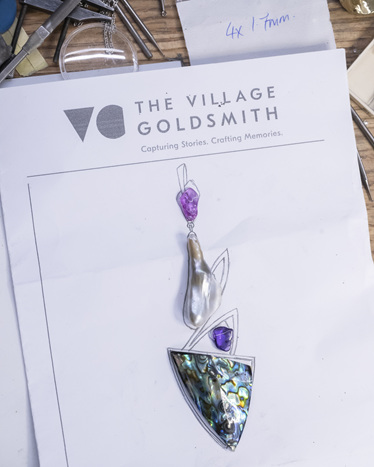 Our master jeweller, Darren, rolled out bars of 18 carat yellow gold and heated them to then mould into shapes that would perfectly encompass each attribute of the pendant. The natural South Seas rough pearl and sapphires each sit atop curved plates of yellow gold, which lightly hold them in place, but as not to take away from the beautiful paua centrepiece. The remaining gold has been bent into sharp lines and shapes to symbolise the hard path the demi-god sons underwent, it was not straight forward, there were bends and obstacles in their way before their parents were finally divided.

Each piece of the pendant was crafted separately and then solder joined together right at the end. It took thirty-three hours of crafting gold and setting rough cut gemstones to bring this pendant to its beautifully finished glory. The Tāne Pendant was a finalist in the 2019 Jewellery Design Awards (JDA) under the Pearl Category.

If you are interested in our other Māori Legends creation, Maui, you can read that story here.