Skip to content
FREE SHIPPING on all orders oVer $1000
Words from Terry McCaul:
When I met my wife I was quite scrawny and earned a nickname of Scarecrow.
My wife, Jane, has always liked dragonflies and has many household items with pictures of dragonflies etc.
Over the years I have given Jane birthday cards, valentine cards and anniversary cards all with dragonflies on them and all signed by the Scarecrow.
For her 50th birthday (2008) I gave her a CD of songs that I had written and recorded for her. The CD was professionally produced and featured some well-known musician friends of mine. The album title was “From Scarecrow to Dragonfly” and took me six months to make.
In 2015 I wrote and produced a children’s book titled the “Sad Scarecrow”.  It featured a story about a scarecrow and a dragonfly who became his friend and taught him to fly. The story is about the dragonfly freeing the scarecrow from being tied to the ground and learning to enjoy life. Saved, you might say.
The sketch used to design the pendant which has been produced by The Village Goldsmith is the sketch that I drew for the cover of the CD I produced. The pendant is a beautiful version of that sketch.
The pendant is to celebrate our 40th wedding anniversary and that is why it contains a small ruby in the head of the dragonfly. Ruby is the stone for 40 years of marriage. The Scarecrow and Dragonfly are always together… 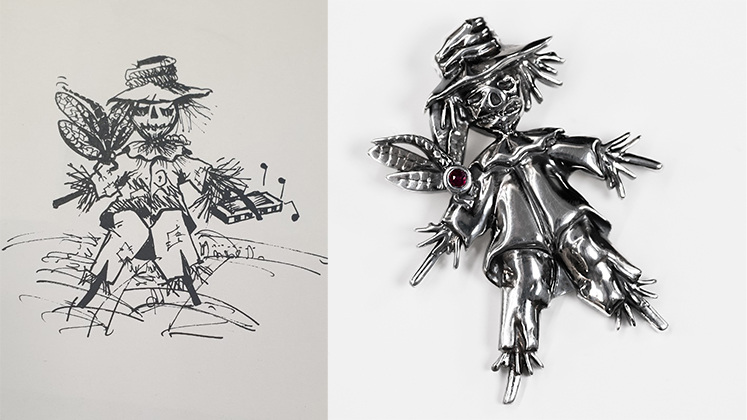 At The Village Goldsmith we love getting the opportunity to create a beautiful piece of jewellery which holds a special memory or tells a unique story, close to a client’s heart. Our whole team loved being part of crafting this piece, especially our jewellery design consultant Jo, who worked closely with Terry to bring his idea to life. In her words, Terry is “a man with many talents and it was a lot of fun helping to bring this together. Our jeweller Heath did an incredible job of crafting it.”